I was very lucky to have a chance to see Phillip Phillips in Japan at the Premier show Case. 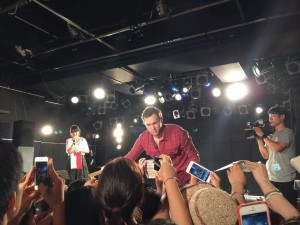 After the show in Japan

As Phillip is going to have His First album out in Japan, I would like to write about His music and what I like of Him.

日本語の記事はこちらです。(You can read this review in Japanese)

Me and Phillip Phillips

My first experience to know Phillip Phillips was American Idol Season 11.
When I first saw Him on television I thought that US is a crazy Country that has this kind of great talented artists nameless.
American Idol was always in very high level, and also has produced many talents but for Me, Phillip was special.

I saw “The Voice” and “The X Factor” if they were broadcast in Japan, and I believe that Phillip is the best artist I saw in these Reality TV shows.

After Phillip wined American Idol Season11, I tried to follow his action.
The first album “The World from the Side of the Moon” was very good, and I felt very relief because I was convinced that He will success on Music Business.
And I Also felt that His first album was not on a strange direction.
It was very full of Phillip Phillips.

After His first album, I could get to know that He was doing well in US tours.
But I was surprised that the 2nd album came out so fast.
I think He has a lot of materials now.

Okay, let Me write about His Music and the songs I like of Him.

I bought this EP as soon as I could.
This EP is very good to know His roots.
The tracks are all from the performance of American Idol Season11.

“Home” was sung in TV Show GLEE which I love too.
I think it was well arranged in this version.

Superstition is an old song from Stevie Wonder.
This song has groove and is totally different from “Home”.
It attests that Phillip Phillips has wide range talent to many Music genre.
I believe that His main style of Music is songs lie “Home”. But this performance attests that He can perform and entertain listeners in many ways, not only one.
This is one more thing that I like of Him.

By the way, I first knew this song from Megadeth.

“We’ve Got Tonight” is a song of 1983 sang by Kenny Rogers and Sheena Easton.
Phillip sings this song alone but is very good.
All I can say is GREAT.

I would also like to recommend “Have You Ever Seen the Rain” which is not in this EP.

I will write about “The World from the Side of the Moon” in the next page.

海外ミュージカルドラマ Glee Season6 #10 “The Rise and Fall of Sue Sylvester”